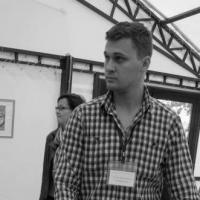 Petrusenko Ilya Romanovich.
He was born on September 24, 1989 in the city of Komsomolsk-on-Amur.
From 2006 to 2008 - studying at the Crimean Engineering and Pedagogical University, Faculty of monumental art and sculpture, teacher Aliev Aider Enverovich.
In 2012 he graduated from the Kiev National Academy of Fine Arts and Architecture (KF NAOMA), the teacher Dudchenko Nikolay Yakovlevich, Molchanova-Dudchenko Elena Aleksandrovna.
He has participated in international and republican exhibitions since 2006. His works are in private and corporate collections in Russia, Sweden, Canada, the USA, China and Ukraine.
In 2013 - a personal exhibition in the city of Suzhou (China).